location at the border

Removing A TIP From a Car Wrecked in Mexico

The process is very complicated. Due to an accident the vehicle is a total loss. This is the summary of options and process. Made more difficult by the car owner having left Mexico.

a) If you chose not to go through the process of removing the car from Aduana’s records, in the future you wish to drive your vehicle to Mexico, you may not qualify to do so as you did not cancel your TIP..

b) If you choose to remove the TIP from Aduana’s records here are steps you follow:

1. Write a letter to the Administracion Central de Operacion Aduanal and give them all your information and explanation of events.

2. Request Anexos 1, 4, 5 and 7. Each of these Anexos require a lot of writing and formal requests. Pls. see below.

Anexo 4: is the accident report, it must be presented to the closest Aduana where the accident happened. Once they clear it you must obtain a copy from them.

Anexo 5: is the authorization and request to destroy the remains of the vehicle. This is important because the authority is issuing you their approval.
Anexo 7: request to cancel the TIP. Here you must send the original TIP along with the sticker.

Courier service is required to send documents to: Avenida Hidalgo # 77, Modulo 4 1er piso, Colonia Guerrero, Delegacion Cuauhtemoc, Codigo Postal 06300, Mexico DF. After you mail all the documents, you must call them within a few days to confirm they have received the information.

You may also email documents to: CIITEV_AduanaMexico@sat.gov.mx

Recommendation: you may not want to go through this process as it is so much work and so many step. That means you don't drive a vehicle in your name into Mexico again. Or, you may trailer out the vehicle to the border.

In the evolving story of how Aduana/Banjercito are adjusting their official policies on temporarily imported foreign-plated cars (TIP vehicles) to accommodate the Nov.8 2012 INM changes, the central Aduana office for TIPs in DF is now rejecting TIP extensions for WORKING Residente Temporal card holders.
Aduana DF has ruled (both in writing and on phone calls) that Residente Temporal Lucrativa permit holders are equivalent to the old FM2 Inmigrante Lucrativa , and hence are not allowed to keep their TIP cars. When expats get their Resident Temporal card with permission to work, their TIP vehicle ( Permiso de Importación Temporal de Vehiculo ) becomes immediately illegal and must be taken out of Mexico.
Residente Temporal Lucrativa permit holders with TIP vehicles must either permanently import their vehicles, or take them out of Mexico. ( See Retorno Seguro for a free 5 day permit to legally drive your car out of Mexico at: What to Do If Your Car Becomes “Illegal” – The Retorno Seguro Program / Permit.
For other options, also check out: Options for Foreign-Plated "TIP" Car Owners in Mexico, esp for Permanent Residents
Note that if the police find a TIP car being driven with an expired TIP (e.g. when you have an accident), they can confiscate the car permanently. Also note that some insurance companies use the excuse of having an invalid/expired TIP as justification to deny payment on accident claims. In the case of severe accidents, denying coverage can leave the car owner on the hook for $3 million to $5 million pesos of liability per death from an accident, regardless of who is driving the car...
steve
* * * *
Feel free to copy while giving proper attribution: YucaLandia/Surviving Yucatan.
© Steven M. Fry

here are the locations but I can not tell if accurate, The one in SanYsidro was not there. and it shows all do not perform all services. but they do have the operating times. These are for all of Mexico, though I am just listing the west ones. 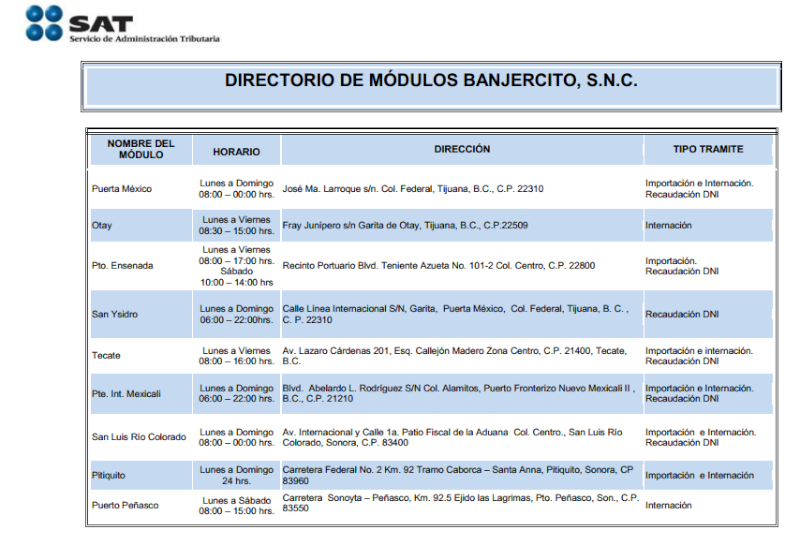 Please note that SAT staff made visits to the Consulates of Mexico in the United States of America, for carrying out the cancellation of permits importation of vehicles, according to the following schedule:

this is the new location to remove a sticker or get one.    no longer at San Ysidro

also there is a place right next door that can nationalize your vehicle in 6-7 hours I am told....

Banjercito office at Otay Mesa is in:

at the x in the below map is what I have been told.  can someone verify this and take pictures for us... 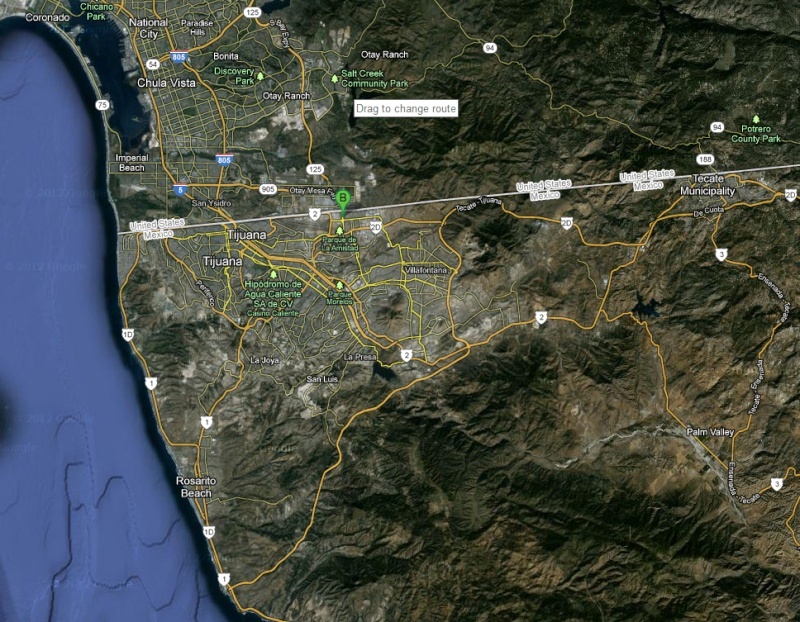 closer of OM A 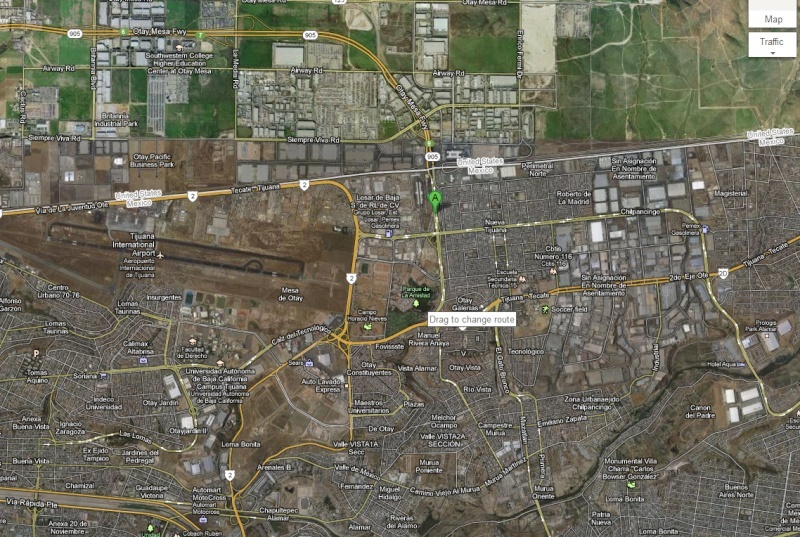 It appears you can get in easily if crossing from the USA.

And looks like only westbound from Blvd Bellas Artes  can you get in if coming from mexico, the nearest cross street (overpass) does not have a exit to west Bellas artes. 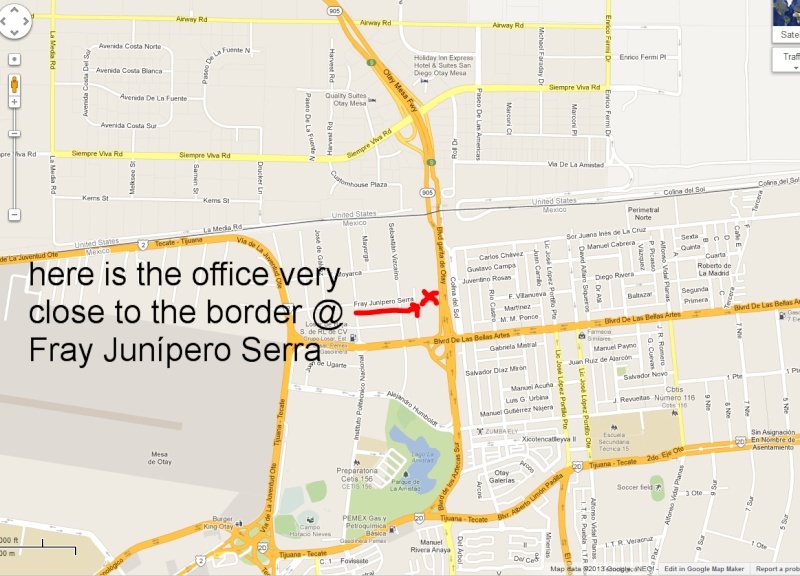 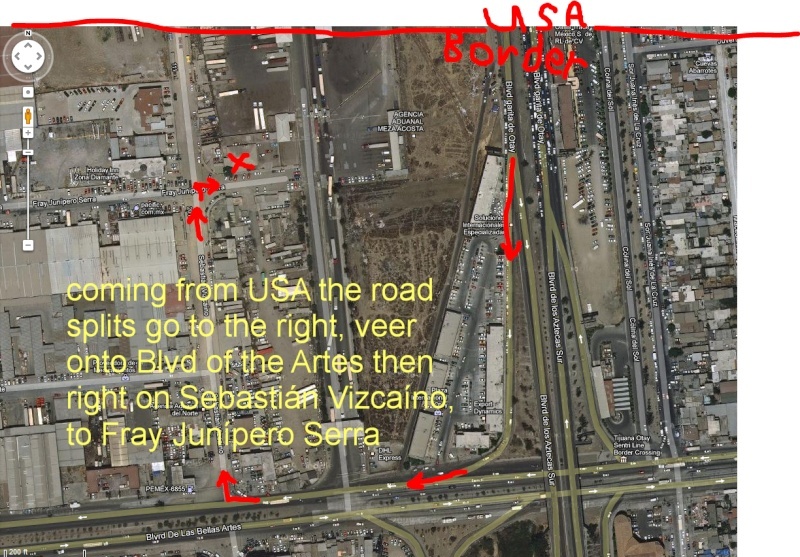 if coming from Tecate or rd2000 this is how you would do it.  Note that when you turn right on Instituto Politécnico Nacional as you pass Avenue of the artes the road name changes to Avenida José Manuel Salvatierra, keep going straight and turn right on Fray Junípero Serra keep going, till you hit the intersection of Sebastián Vizcaíno,  go to the building on the left. 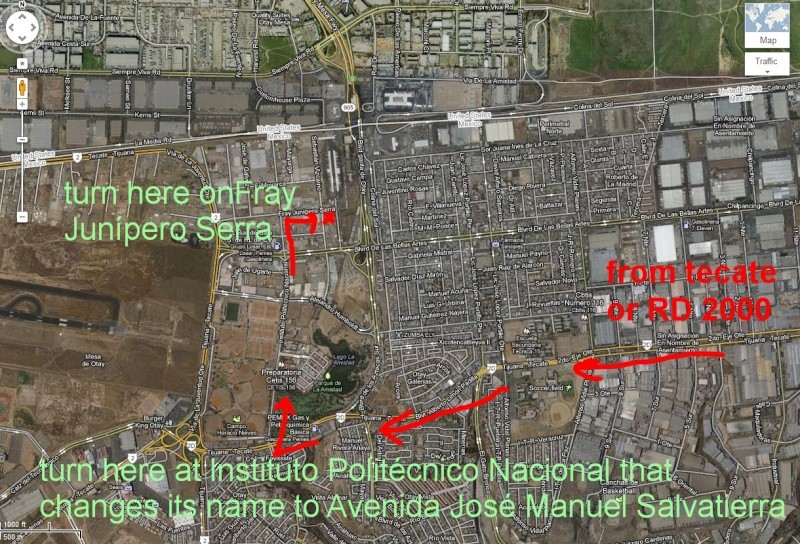 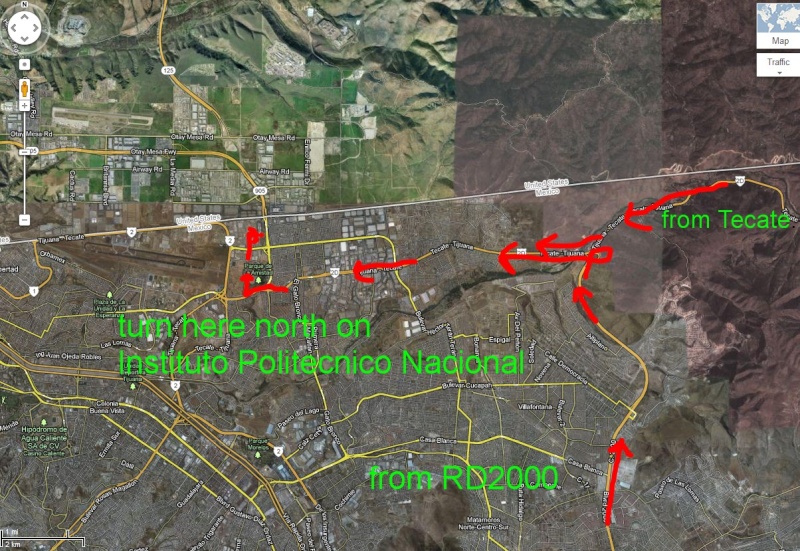 here is the office from google maps @ the intersection of Fray Junípero Serra and Sebastián Vizcaíno,  the picture of the area may have changed but the office is right at this intersection. 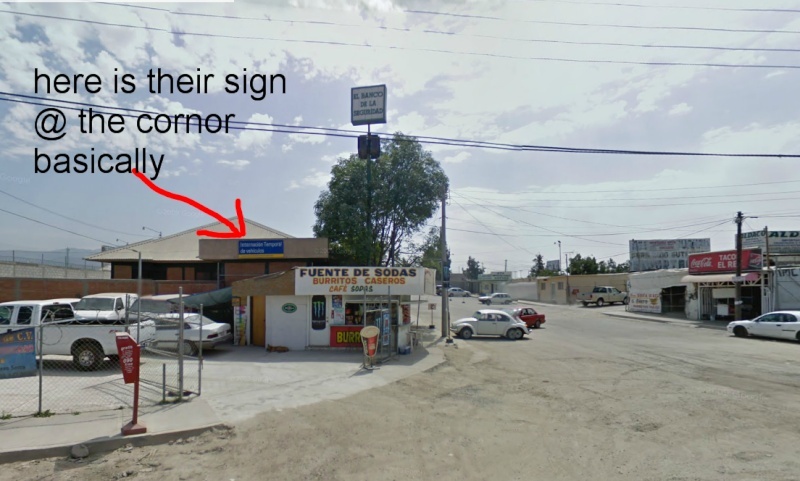 Cars and pickups (no dually’s) can be either permanently or temporarily imported by expats with FMM’s, FM3′s, and FM2-Rentista’s. The vehicle must be exactly 10 years old to be permanently imported (tramited / “nationalized”), see “Importing Used Autos”“, but temporary permits are issued to FMM, FM3 (No Inmigrante), and FM2-Rentista (Inmigrante Rentista) visa holders. Temporary permitted vehicles must be returned at the end of the visa’s period, or the car can be confiscated by Mexican officials. Vistor’s FMM’s and hence their temporary permits are for 180 days, while vehicles temporarily imported under FM3′s and some FM2′s are allowed to stay in Mexico as long as the visa remains valid. The owner of the vehicle must stop at Aduana offices at the border to have them remove the import-sticker whenever the vehicle leaves Mexico.

Your car registration is valid as long as your FMM, FMT, FM2, or FM3 is valid; and
It describes who is allowed to drive your car. (see below)

Article 106 allows foreigners to temporarily import a car into Mexico for the duration of the registered importer’s immigration status: e.g. 180 day FMM visa gives 180 days for their car; FM3 & FM2 holders have the 365 days for their car (plus any extensions or re-applications).

It is also worth noting that:

The car import sticker is valid as long as the holder’s Visa remains valid, regardless of the expiration date shown on the import sticker. FM3 period = Vehicle’s approved period.
As long as you made your original deposit with a Credit Card, there is no requirement for the driver to go to a border crossing / car permit office to renew it, because it is automatically renewed when you renew your FM2 or FM3.
You are required to notify the Mexican Customs office IF YOU MADE A CASH DEPOSIT TO REGISTER YOUR CAR or if you made a credit card deposit after June 11, 2011. This notification (including copies of the vehicle permit and copies of the renewed Visa) can be made in writing and sent to:

“IMPORTANT ANNOUNCEMENT
The Ministry of Finance and Public Credit (SHCP) has issued a decree which states that beginning on June 11th, 2011 anyone applying for a temporary import permit for vehicles must make a deposit in the amount determined by the following table:

*Peso amounts are based on applicable exchange rate

This deposit is compulsory and can be paid by credit card, debit card, or cash (in US Dollars only).

Users must keep in mind that if the deposit is charged to a credit card, the charge will be made in Mexican Pesos and will be calculated based on the exchange rate of the day on which the payment is made. This deposit will be refunded to the same credit card on the next banking business day after the vehicle is fully returned and based on the exchange rate of that day.

The vehicle must be returned on time and within the time period stated on the temporary import permit. If the vehicle is returned after the stated time period, the entire deposit amount will be transferred to the Office of the Treasury on the day following the expected return date, as allowed by current law.”


Last Item:
Another clause in the new updated regulations requires FM2 Rentista and FM3 holders to notify Aduana within 15 days of when they renew their FM2 or FM3, otherwise Aduana is allowed to confiscate/keep these “new” deposits. Aduana’s address is listed in Yucalandia’s main article on cars in Mexico: “Importing & Driving a Car in Mexico”

* * * *
This post is meant as a public service announcement (not meant as legal advice), so, we here at Yucandia will keep the post updated with further understandings and clarifications as they develop.

If you need to get or remove a temporary import sticker in TJ here is the location at San Ysirdo the main TJ crossing.

they are very fast here, there is a bank in the building also.   you need copies of drivers license, registration, passport and a credit card.    the cost is about $30.00