http://www.eia.gov/electricity/state/arizona/index.cfm
Hawaii highest in the USA same as Mexico but they do not have 100 degree plus days much less 4 months of them. AZ 10 cents per kWh. there people have 300-500 dollar electric bills, that would be 2.5 times higher in Mexico.

OK I think I figured out the discrepancy, I think they read the meters in LaPaz once a month and here once every 2 months. So they just do a straight line averages for LaVentana divide by the total days. Where in LaPaz they use actual monthly reading which is far better.

Here is the summer rate chart….

if you are top tier... how to determine it

(Editors note: The following is an article that I found helpful. I reprinted it from Yucatan Living, a web-based magazine on the internet)

If you live here, you know about the CFE: La Comisión Federal de Electricidad. But no one calls it CFE here in Mexico. They call it by its first name only: Comisión, and everyone knows who they are talking about. Electricity is the most expensive utility in Mexico, at least among the expat crowd. Comisión has a great website, where they proudly proclaim, in both English and Spanish, that they are una empresa de clase mundial (A world class company). On the website, you can learn about their mission, find out the weather all over Mexico, read the history of the Comisión (did you know that as late as 1937, there were three different companies providing power in Mexico?), read their financial statements, and of course, pay your bill. Oh, oops! You can’t pay your bill there… but they will refer you to a bank (Banamex, Banorte, Inbursa, Bancomer, HSBC or Santander) where you CAN pay your bill online. Of course, there is much MORE information on the Spanish side of the website, but really, the fact that there is an English website at all is rather impressive.

Usually, we have no occasion to read the website. We pay our bills, in cash usually, and we are grateful for reliable electricity. But the other day, due to personal circumstances, we learned something about electricity consumption here in Mexico, and we thought we’d pass it on. This is not something we would have ever known if we hadn’t moved from one house to another and noticed a big change in our electric bill.

In our old office, we worked in a traditional colonial home that had been renovated. Due to a lack of windows, we ran two mini-split air conditioners all day, every day while we were working. We had a small refrigerator. We regularly paid bi-monthly bills of $8,000 pesos or more during the summer months. We figured this was just the cost of doing business.

Flash forward to our new home and office combined. We built this building with air flow in mind. We built higher ceilings, a second story, skylights that open, and a breezeway, so consequently, we have less need for air conditioning, even during the hottest summer days. In addition, this house and office are almost completely new: new walls, new wiring, new fixtures. Electricity flows unimpeded by faulty connections or old wiring. Our appliances are all new, so we have energy-efficient air conditioners and refrigerators (yes, we have two refrigerators). The house and office combined are at least three times larger than the former house and office, and yet the CFE bills have been less than a third of our former bills.

(Insert mental picture of us quizzically scratching our heads…)

We were extremely grateful for this… but also puzzled. We looked at the meter… yep, the right meter number is on our bill. The meter is turning. The reading on the bill is correct. We were a little afraid to ask, but we called CFE to understand why our new bills are so much lower. Here is what we learned:

If a house uses over 850 kilowatt hours (kWh) of electricity per month, averaged over a year, it will get bumped from the "1C" Tarifa (rate) to the "DAC" Tarifa (De Alto Consumo, which means “of high consumption”). Once this happens, your rate climbs in three ways. First, DAC customers are charged a minimum of $65 pesos per month. Secondly, the Basico (basic) charge for DAC consumers increases from about $0.5 to $2.5 pesos per kilowatt hour (summer prices). The third whammy (that’s the technical term in English for golpe) is that the government does not give you an Aportación Gubernamental (Government Subsidy). That aportación can underwrite more than two thirds of your bill every month, which is certainly not trivial. take a look at our last bill, below, for reference.


If you find yourself still categorized 1C, know that you have to stay under 850 kilowatt hours of average energy consumption per month every year. You’ll enjoy lower energy prices and a government subsidy if you do. If you use more than that for twelve months running, then be prepared for much higher energy bills and no subsidy. If you find yourself already in the DAC category, what can you do? Cut your energy costs down to under 850 kilowatts per month for 12 months, and the CFE computers will (supposedly) lower your rates automatically. If they don’t, here’s what you can do: Take another look at the copy of the bill below. See the column titled, Consumo kWh por dia? Multiply that number by 365 and divide by 12. That’s your average monthly consumption. If the number is less than 850, chances are you qualify, so take a stroll down to La Comisión and ask them to change your Tarifa back to 1C.

If these policies aren’t motivation for cutting energy consumption, we don’t know what is.

In investigating this issue, we have learned more about how CFE charges.

CFE rates each city in Mexico according to its average temperature. Merida is a "1C" city, whereas Chelem, por ejemplo (for example) is a 1B city, meaning it’s average temperature is lower (in this case) and warrants less energy usage. The chart below shows the level of Kilowatts per month that the consumer must stay below in order to avoid being charged as a DAC (de alto consumo) customer.

Editor’s Update: We recently followed a Google ad to this wonderful YouTube page sponsored by CFE. It’s in Spanish, but even if you don’t understand it all, you will certainly get that CFE and Mexico are beginning a campaign to teach Mexican children about saving energy. Viva Mexico!

here is the rates paid in California, note California is a more expensive rate than most in the USA.
http://www.cpuc.ca.gov/PUC/energy/Electric+Rates/ENGRD/ratesNCharts_elect.htm

Hawaii has the highest rates of any State about 35 cents a kwh. Note Califoria's rate is less than Mexico's main tier. In the winter a american size refrigerator alone will put you into the second tier.

here are some worldwide, europe is real high and as we know they do that with gasoline too. http://en.wikipedia.org/wiki/Electricity_pricing

A typical large old style style american refrigerator can use the lower base by itself. It is not going to get any better... If you are thinking of building time to look at the EF Block made in LaPaz. www.efblockmx.info Build your house out of this block for effective R value of 23 and with mass loading about R40 or so. The cost estimate on the site only adds $4,000.00 per 1000 square feet of building size. www.efblockmx.info

Mexico City. Jul electricity prices will be 8.4% higher than in April. The Federal Electricity Commision (CFE) Explained, the residential sector, That Uses The most energy will be charged the High Domestic Consumption rate (DAC) at $ 3 pesos per kilowatt / hour (Kw / h). The Industrial Sector rate is at $ 0.9959 and $ 1.7090 pesos during peak hours. In April the kilowatt was more affordable at $ 0.9188 and $ 1.6356 pesos respectively.

The methodology That was first used in 2011 Incited That in the electricity price agreement for the next 12 months the Ministry of Finance ( SHCP ) allowed this Increase in high and medium voltage and high consumption rates CFE user.

According To CFE, regulate residential rates REMAIN the same and only around 500,000 high consumption and commercial meters will be Affected by the changes. In the country there are 36.7 million clients, of which 88% are residential, commercial 9.93%, and 2.07% Industrial and agricultural users, These Latter being the highest energy consuming group.

CFE Explained That the spike in charges is due to the Decrease of natural gas used for generating electricity Caused by lack of crude oil in Pemex pipelines for fuel oil was used Which During the past 18 months. In 2011 fuel oil was priced at $ 9.74 pesos the liter, $ 8.75 in 2012 dollars and in 2013 $ 8.78 pesos. Prices are expected to REMAIN high.


we are 1D DAC rate means if you a massive consumer of electric you do not get any discounts, you will pay the max rate all the time. In out area it is 1000kWh per cycle 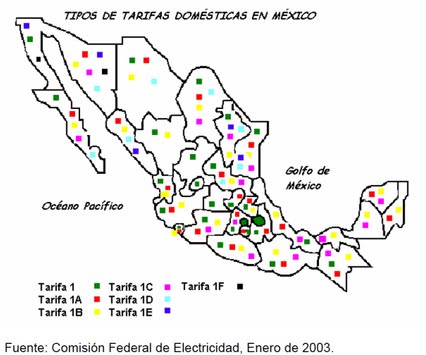 here is a bill of a person with block construction who zone area cools, no pool.

they hit the DAC rate so they pay at up at 40 cents per KWH for all power.   depending on where you live the DAC threshold is different.  this is a bill for $1500.00  for the summer 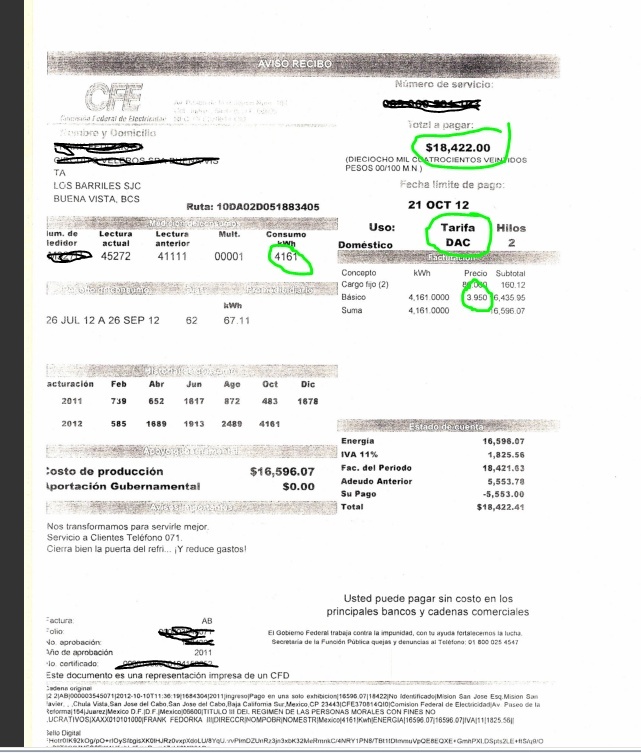 here is a spring bill when the weather is nice.  the DAC rate is about 30cents /kwh 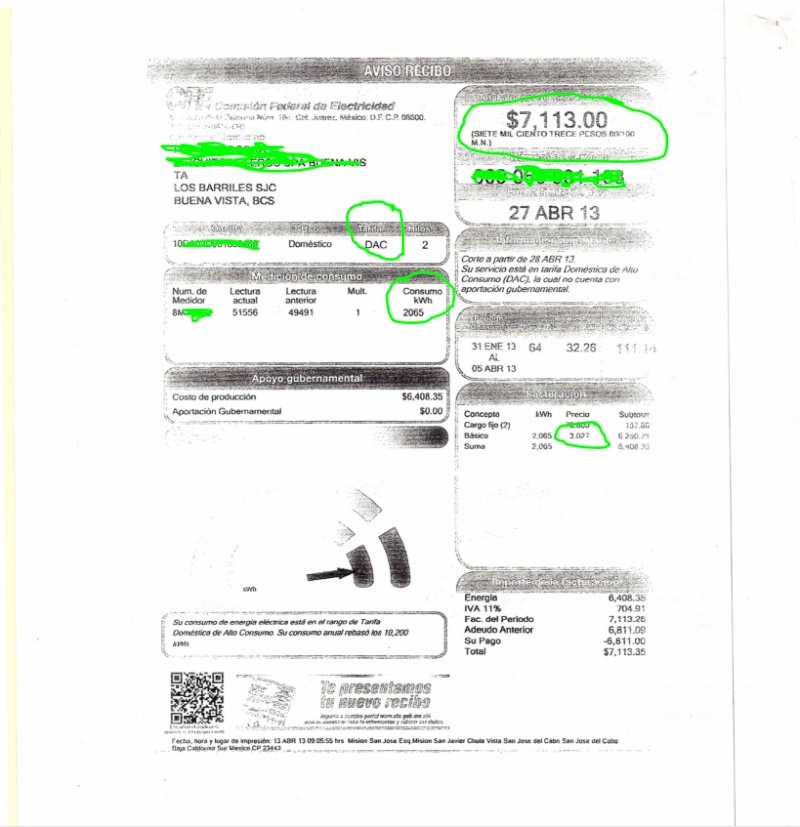 Courtesy of the Baja Citizen:

Comisión Federal de Electricidad (CFE) has Reclassified Domestic Rates for La Paz TBC CFE has announced that it has reclassified domestic electricity rates in La Paz, the capital of Baja California Sur and 11 surrounding communities. The reclassification will allow for a reduction in the amount paid by the consumer starting next month, according to authorities.
In a meeting held by Governor Marcos Covarrubias Villaseñor, who was accompanied Mayor Esthela Ponce Beltran and executives of CFE, it was confirmed that according to data from Comision Nacional Del Agua (CONAGUA), La Paz and its surrounding communities will benefit with the reclassification of the rate from 1D to rate 1E.
Executives of CFE announced that the communities of La Paz, San Pedro, Álvaro Obregón, Los Planes, Agua Amarga, El Sargento, La Ventana, El Centenario, Reforma Agraria, Conquista Agraria, and Ejido Alfredo Bonfil had been reclassified from the rate of 1D to 1E. El Triunfo went from the 1A to 1B. The change in rates is based on the finding that over the past 5 years, according to data from CONAGUA, average temperatures in the municipality have been rising.
“Last week we
were told by the superintendent of CFE that based on climate conditions in the rise in temperatures, that for the first time rates would be reclassified. This will effect 11 communities in the municipality of La Paz which will in turn see many users seeing a reduction in their domestic electricity bill.”
Covarrubias Villaseñor explained that La Paz was reclassified for having an average minimum temperature of 32 degrees while El Truinfo reported average minimum temperatures of 28 degrees. He also gave the example that a home that consumed 1500 kilowatt-hour per every two months was paying 2050.06 pesos. The home will now pay 1102.90 pesos.
This reclassification will benefit up to 84 340 users in the municipality.

At the meeting, CFE also invited users to continue applying measures to save energy and to use energy efficiently.

Winter there will not be much of a difference.  It just goes from 200 to 250kwh for the max rate.

above explains your bill

also i just read we can use our USA credit cards to pay the electric bills online now.....

and here is someones discussion on the dac rate

go to the CFE website and it will tell you your climate zone and what the monthly allotment is for thst zone. When the average of 3 bills exceeds your allotment you go into DAC until your rolling 6 month average falls below that. When in DAC you get charged the highest rate from Kwh 1. No bueno.