new spot in LaPaz is still on bravo but two blocks closer to the water, on revolution.

facebook wrote:
Anthony Boesen Los Planes to La Paz bus - use this information at your own risk.

I think I am one of the few Americans that will ride the bus. In all the years of riding the bus I have only seen one other American. I like the adventure of immersing with the locals.

I took the bus back from La Paz the other day. This is what I learned.

The bus still parks at the corner of Nicholas Bravo and Gullermo Prieto in La Paz. There are no signs on this bus, it is white and blue. This is a five block walk to the Malecon (water front – beach). You will see the whale shark boats as you enter the beach. There are several good places for breakfast. I know that KM-0 and an open air hotel just two more blocks to the east have good internet.

After breakfast, I go to the tourist office to check out anything new. You can explore the downtown shopping area. There is an open air / street market to browse through.

For the more adventurous there is Bus Centro, 2 blocks south and 2 blocks west of the tourist office. You look for buses that takes you were you want to go. Example: the Wal-Mart shopping area. Cost is 10 pesos per trip. If you do not see the bus you need ask, I found my bus to be at a different pick-up spot then last time. The buses are run by independent operators as far as I can tell. The Wal-Mart bus will give you an interesting tour of La Paz, but be assured it you will get you to Wal-Mart. My newest discovery is Chedraui, the grocery store. They have almost everything. Well organized and clean. They even have a North American food section.

Getting home: Be at the bus before 2:00. If you do not catch the bus on time, you will need to find another ride or stay in La Paz that night. Do not go on the highway at night.

The true cost is 70 pesos according a local La Ventana girl; I just gave him 100 pesos and got no change back. I also tipped him 20 pesos. I think that helped, in that he came to La Ventana before going to Los Planes. I was dropped off at Playa Central. A short walk home and life is good.

Tips: Be sure to let him know you are going to La Ventana. There is only one bus a day. You will need to check for Saturday and Sunday times. Always ask the driver for the time he is leaving. A little Spanish can go a long way. Ride closer to the front of the bus; the back of the bus can be a jarring ride. There is a small shopping center across the street from the bus location. It is a great place to buy some items before going home. Example: meats and groceries, several eating places inside. The Banos is 5 pesos in the shopping center.

the bus does not seem to be picking up or dropping off in LV anymore. you have to go to the T intersection to catch it rumored 7-7:30

they drop off at the T coming from LaPaz, and easy to hitch hike here. 2pm is when they depart LaPaz

BUS .. Time Correction (These schedules may change; call the driver to check)
BusTimes from Pablo's store across from La Ventana Campground.
From La Paz times are from the market at Bravo & Prieto. Bus parks near the market.

bus is now running 2pm and 7 pm to come back to LaVentana. except sunday.

Leaves Laventana 7am and 3pm for LaPaz.

These are mini buses. And it clearly says "el Sargento" and you can see it while at the corner at Bravo street. It is about 50 feet from the corner on the one way street and again the Bravo Mercando (bravo Market) is at the same corner just across the street.

almost number 20 is where the bus picks up and drops off from/to LaVentana, on the other side of Bravo walking towards 21, in this area. and it is parked on the side of the street farthest from the water (or the side to the bottom of the map) side of the street.. It is on the street parallel to the water right at nicholas "bravo". 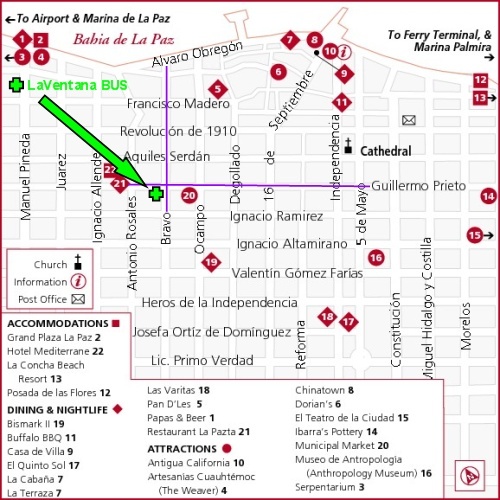 The bus fare is 40 pesos each way.
Monday to Saturday inclusive, the bus leaves La Ventana for La Paz twice a day: at 7:00 a.m. and at 4:15 p.m. Just flag down the bus as you would a taxi. (These are the departure times from in front of Pablo's store, across from the campground.
The bus takes the main road into La Paz. The driver stops for passengers who flag him down along his route so just add or subtract from the 7:00 a.m. and 4:15 p.m. departure times depending on where you are on the bus route.)
Monday through Saturday, the bus returns from La Paz to La Ventana, leaving La Paz, at 2:00 p.m. However, on Sunday, the bus leaves La Paz an hour earlier, at 1:00 p.m.
For those who wish to return from La Paz later in the day, there is a bus leaving La Paz for La Ventana in the early evening (Though I don't believe there is a 4:15 p.m. or evening bus on Sunday.). It is best to always confirm the return time with the bus driver. Simply ask, in Spanish: A que hora regressa a La Ventana?
If you ask, the driver will let you off at La Soriana shopping center. However, most passengers take the bus to the end of the bus route at the intersection of G. Prieto and Bravo streets. This is 5 blocks up from the Malecon. (If you walk down Bravo street to the Malecon from the bus stop, you'll come out on the Malecon at Applebees Restaurant which is across the street from the Mexican Artisan shop and the tourist Information Centre. You're close to downtown.)
One of the unique features of this bus service is that when the bus arrives at its final destination in La Paz - stopping at G. Prieto and Bravo street - the bus stays parked there until the driver makes the return trip later in the day. As a consequence, if you arrive 20 - 30 minutes early for the return trip, there is a good chance the driver will let you board so you have a comfortable place to wait until the bus departs.
Although the bus driver lets people off at various destinations on the trip into La Paz, the return trip appears to be a non-stop run from the bus departure location at G. Prieto and Bravo streets.
The bus used to go to La Paz via Los Planes. However, on both occasions earlier this week when I took the bus into La Paz - on Monday and on Thursday - the bus went directly to La Paz. (Perhaps our little town of La Ventana now rates its own bus service.)
The bus driver is exceptionally pleasant and a very professional driver. As a bonus, he seems to remember where all of his passengers live (or boarded) and stops his bus close to his passengers' "front door".
Rita (#1, Calle sin Nombre, La Ventana)

Times from Pablo's store across from La Ventana Campground:

Bus schedules, in reply to Ventana View of the 31st of January

There is a bus, probably on communal initiative, which traffics between El Sargento and La Paz every day inclusive Sunday excempt some holidays like NewYear or similar. The busses usually stop at demand, you have to tell the driver or to shout out.
Told by heart, schedule and fare is the following:

Dep. La Paz 8 PM , Los Planes 9 PM , La Ventana/El Sargento 9.30 PM plus/minus (this bus is sometimes quite full. It starts directly from the parking in front of the Mercado Bravo)

The fare right now is Mx$ 40, payable counted upon entry or with change at stepping out.

2) I've seen a bus that leaves to the airport probably from the central bus terminal in the center of the old town of La Paz (near Coppel) though not yet tried out.

i took this bus recently from LaPaz and it is about 5 blocks from the malicon on bravo, but on the side street perpendicular to bravo, you can not miss them. they are on the side of the street farthest from the water. also they do stop at any bus stop to pick people up on the drive back, so you can be picked up at the bus stop at the first light near the coke plant.

Similar topics
» Bus from LaVentana to LaPaz
» bus from downtown lapaz to LaVentana
» for today,,,
» shipping to LaPaz or LaVentana
» ground transportation from airports cabo or LaPaz