A group of non-profit organizations wants the municipal council in La Paz, Baja California Sur, to explain where the water and other services will come from to serve new real estate developments that have been announced in the area.

At least nine environmental organizations, including the Citizens’ Observatory of Water and Sanitation, the Center for Biodiversity, the Inter-American Association for Environmental Defense and the Mexican Center for Environmental Law (Cemda) have, for the second time, asked La Paz Mayor Rubén Muñoz Álvarez to take into account the city’s water shortage when considering approving real estate projects.

Cemda’s regional director, environmental lawyer Mario Sánchez, told the newspaper Diario El Independiente that while “the pandemic makes the problem of water shortages more evident,” council members have not responded to repeated requests from environmental organizations that would like representatives of local government to disclose the city’s capacity to meet the current demand for water and electricity before announcing new developments.

Sánchez says that at least 10 new projects have already been approved, including coastal real estate developments and housing projects.

Environmental activists claim that the La Paz aquifer, the main source of water for the city, is overtaxed and the city has long been faced with a water shortage.

The capital of Baja California Sur has seen its population grow by at least 15% in the last five years, Sánchez says. The surge in demand for water, coupled with the lack of efficient management of the resource, has generated pressure on the city’s water system as the aquifer is being depleted, he says.

Sánchez and the other associations he represents claim that in 2018 La Paz had a water deficit of 7.4 million cubic meters, a figure that could be much higher today.

Cemda cites a 2019 study by the Autonomous University of Madrid which estimated that 500,000 liters of water are needed for every 100 square meters of residential construction. In order to supply enough water to just one of the 10 projects that the city has approved, the 200-hectare mega-project Misión Punta Norte, the city would need to provide the planned 4,600 residential lots with approximately 10 billion liters of water during construction, enough to fill four Olympic pools, Cemda says, adding that 4% of existing homes in La Paz are not connected to city water at all.


“It is worrying that the approval of real estate projects continues, including the offering of thousands of residential lots when public administration is not in a position to ensure the provision of services such as clean electricity, waste management and especially water to the entire population of Baja California Sur’s capital,” Sánchez said in a press release.

Water shortages affect cities across the state, and Baja California Sur is required by law to develop a long term water resource plan covering the years 2020 through 2045. The last water plan for the state was prepared in 1985 and expired this year. 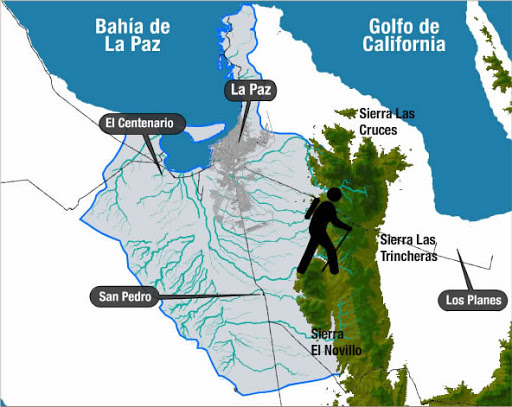 The coronavirus pandemic has not altered plans to construct four desalination plants in Mexico’s northeast, a region with long-running drought problems.

At a combined investment of 12.8bn pesos (US$555mn), the projects were unveiled in November when the government and the private sector presented the first stage of the 2020-21 national infrastructure program (PNI).


BNamericas takes a look at how the projects have evolved since their announcement.

It is the first step before the pre-investment stage and launching of the construction tender, according to Salas.

-“CIPRO is responsible for carrying out the engineering designs necessary to obtain potable water from saltwater and the environmental authorization that, altogether, will allow us to evaluate the amount of investment necessary to build the plant and its operation and maintenance costs that will serve to obtain the necessary federal authorizations for infrastructure development,” he said.

The engineering study will help determine the exact location of the plant, as well as the technology that will be used to deliver the necessary amount of water, said Salas.

The desalination plant will pump 200l/s into the city’s urban area and industrial sector during 20 years, according to the government’s Mexico Projects Hub website.

Construction is expected to kick off in the third quarter of 2021, according to PNI’s plan.

The preliminary construction tender for the Los Cabos plant will be launched on September 30, Christian Agúndez, president of the city’s water commission, told local media on June 11.

A couple of days before that announcement, Los Cabos mayor Jesús Armida Castro Guzmán told local media that the plant’s planning never stopped despite the pandemic crisis and that the city aims to complete all necessary studies this year.

The tender to construct, operate and maintain the plant for 25 years will be launched during this year’s third quarter, according to Mexico Projects Hub.