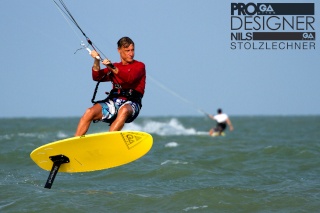 Nils comes to La Ventana with a boatload of experience. In 2010, Nils Stolzlechner organized and held the 2010 Kitesurfing Racing World Championships in Corpus Christi and the year prior, in 2009, he ran the North American Championships. From 2006 to 2010, Nils ran races from Corpus Christi Yacht Club as a race committee member. Prior to that he pioneered and organized the first Maui Long Distance Race back in 1991. Nils isn’t only an organizer, he’s also a champion racer. He has competently raced in regattas since 1982, winning the Maui Slalom Series and the Hawaiian State Championships as well as the European Championships in windsurfing prior the switching to kitesurfing. In kitesurfing he was one of the original racers in the first ever kite race series held at the St Francis Yacht Club in 2005. Nils has been designing kiteboards for over 10 years and continues to design for Gaastra Kites. With Nils as this year’s race director, it’s safe to say the La Ventana Classic is in good hands!