On my 1986 F250 the front tank sender was fine and easy to get to without removing the tank. I did the fuel pick up on that one last weekend and fixed it. Did it with a bit of diesel fuel hose and a strainer as i pictured in my pictures, I did this with my 1990 F350 front and rear tanks a few years ago..

I found that the sender float had a hole so this is why the guage was not working. At the point at the end of the wire arm that locks in the float they have too much pressure on the float. This caused it to punch through over time with vibration like sloshing around.

I was able to fix the float. I noticed they had soldered the float together. So I emptied it out, and then with a dremel with a very light wire brush i polished the groove and all around the hole area. You must have a light touch. The float is very thin and I also polished the holding arm where it would make contact with the float. Then with some thin gauge brass from a hobby shop i have had for 20 or so years cut a small patch about 1/8 inch square to cover the hole. I pre tinned the areas on the float with solder. Then put my patch in (i polished the patch material with the dremel before I cut it) and soldered it in and had some difficulty because of the heat causing air pressure but with trial and error sealed it. Next i bent the end of the arm out so it would not dig into the float again. I then gently put the float in and it was slightly loose on purpose. Then I soldered it in. Total time about 30 minutes just for the float including getting soldering iron our and putting everything away..


On my 1986 f250 today I dropped my rear fuel tank to fix the fuel pick up today the same way. It is now assembled and ready for me to put the tank back on this weekend. (I have no idea how I am going to get that tank back in, it took a bit of cheating to get it out. and have no idea how I am going to get the fuel filling hose back in correctly.) I have a cap on the bed so did not want to do the remove the bed. But now I do not think I have a way to do the tank filler breather hose without doing it.

On this fuel sender I measured the resistance and it was all over the place. IE not working. So took it apart to see the pcb. I have come up with a way to fix the fuel senders. Could even last about the same amount of time. When taking it apart one side has the tab that you press out to open it. Once open you need to remove the pcb without damaging anything else. Once you have it out, with a dremel with a soft brush you clean the contacts between the black (resister) and the old area of contact that you can see is visibly scratched off from wear. You will see some lines that are just a different color. What you have to do is remove the coating on these lines with a light touch with the dremel(in the electronics industry we call it dielectric). This will give you about 1/16 of an inch of new material that the brush can travel on. Test with an ohm meter, you should be able to get 9 ohms all the way to 84 ohms as you slide the ohm meter probes on the new exposed contact material. If there are dead spots you need to remove a little more of that contact material. So the next task is you have to shift the pcb over about that distance in the holder. And there is enough room to do it. I shifted it over and had to remove a little material from two of the retainers with a soldering iron to take some of the pressure off pushing it to the old position. Then from the bottom heat staked the two corners to lock the pcb into the new position with the soldering iron. and test again once assembled.

I wish I had taken pictures when I did it, believe me I am not taking it apart right now, being in baja I do not get second chances. If someone has an open one and can take a picture I can mock it up and post the concept. 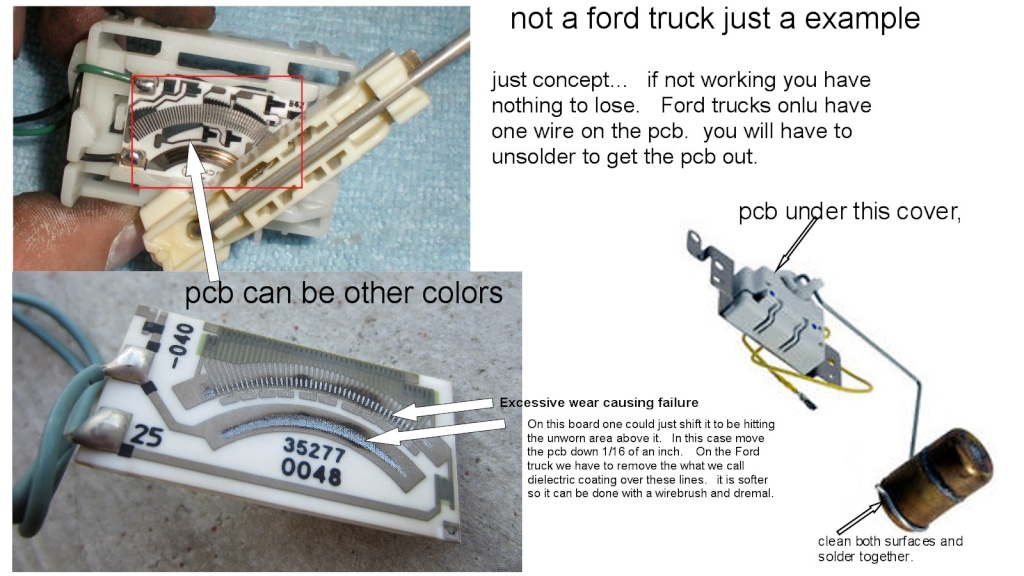 forums for ford  diesels and trucks

Given that people such as myself already have a tendency to mistake streamlined car-top boxes as whitewater kayaks, it shouldn’t come as a surprise that someone has gone and done the obvious – made a roof box that converts into a boat. Instead of serving as a kayak, however, the Boatbox can be rowed like a dinghy, or even fitted with a small motor or a sail. $1000.00

Similar topics
» english spanish automotive terms
» locksmith who can also do automotive keys and program them.