a note I have been adding H2O2 to my mouthwash from the beginning. and I keep some in the car trunk. Note the below is not proven in human testing, just testing via the mouthwashes on a virus.


Mouthwashes may help lower the transmission and spread of the coronavirus, according to a new study.

In the study, published in the Journal of Medical Virology, researchers investigated over-the-counter mouthwashes and nasal rinses commonly found in drug stores and supermarkets, since both types of products “directly impact the major sites of reception and transmission of human coronaviruses (HCoV)” — namely, the mouth and nose — and “may provide an additional level of protection against the virus.”

To find out whether mouthwashes and nasal rinses would be effective against the coronavirus, the researchers tested a common human coronavirus known as 229e — one of several strains that typically only cause mild infections like the common cold, according to the Centers for Disease Control and Prevention — not SARS‐CoV‐2, which is the virus associated with COVID‐19.

Close-up Of Person's Hand Pouring Liquid In Container
The Listerine mouthwashes, as well as Crest Pro-Health, Equate Antiseptic mouthwash, and CVS Antiseptic mouthwash, were “highly effective at inactivating infectious virus with greater than 99.9 percent,” according to the researchers in the study — even after only swishing around the mouthwash for 30 seconds. (Photo: Getty Images)
More
But, as the lead author of the study, Craig Meyers, tells Yahoo Life, all coronaviruses have something in common: “They have a membrane,” says Meyers, a distinguished professor of microbiology and immunology at Penn State.

“With membrane viruses, all you have to do is break that membrane and they’re inactivated,” Meyers explains. “It’s very difficult to work with the actual COVID-19 virus. But the membranes [in coronaviruses in general] are pretty much the same.”

The researchers tested whether certain nasal rinses, such as Neti Pot with a salt/baking soda solution and a diluted 1 percent Johnson’s Baby Shampoo solution and mouthwashes, including Listerine Antiseptic, Listerine Ultra, Orajel Antiseptic Rinse, and Crest Pro‐Health, could inactivate high concentrations of human coronaviruses after using the products for 30 seconds, one minute, and two minutes.

The researchers also found that the mouthwash products with hydrogen peroxide (H2O2) as their active ingredient — such as CVS’ Peroxide Sore Mouth and Orajel Antiseptic Rinse — “all demonstrated similar abilities to inactivate” the human coronavirus 229e by 90 to 99 percent.

With nasal rinses, the researchers found that using a 1 percent baby shampoo solution for either one to two minutes inactivated more than 99 percent of the virus in both cases. But the over‐the‐counter saline nasal rinse, Neti Pot, had “no effect on the infectivity of the virus at any incubation time tested.”

The researchers concluded that these commonly-available healthcare products have “significant virucidal properties with respect to” human coronaviruses.

However, more research is needed — namely, clinical trials to pinpoint which ingredient or combination of ingredients is breaking the virus’ membrane. Meyers tells Yahoo Life that he hopes to get funding to test which ingredients are the most effective.

This isn’t the first study to look at mouthwash products as a way to reduce viral load. In a July 2020 study published in the Journal of Infectious Diseases, researchers tested eight different mouthwashes from pharmacies and drugstores in Germany and found that they all reduced the viral load — in fact, three mouthwashes “reduced it to such an extent that no virus could be detected after an exposure time of 30 seconds,” according to ScienceDaily.

But the German study’s authors emphasize that this doesn’t mean mouthwashes alone can treat COVID-19. "Gargling with a mouthwash cannot inhibit the production of viruses in the cells," lead author of the study Toni Meister of Ruhr University Bochum in Germany, told ScienceDaily, "but could reduce the viral load in the short term where the greatest potential for infection comes from, namely in the oral cavity and throat — and this could be useful in certain situations, such as at the dentist or during the medical care of Covid-19 patients."

Meyers agrees, saying: “You’ve got to be wearing your mask and social distancing. To me, [mouthwash] is an extra help.”

Nicholas Rowan, MD, an assistant professor of otolaryngology at Johns Hopkins Medicine, tells Yahoo Life that the use of mouthwashes and nasal rinses are a “really promising area” and are “very exciting therapies, logical, and likely very low risk.”

And, like Meyers, Rowan says that more research is needed. “There is a lot of credence to these claims,” he tells Yahoo Life. “However, the most significant barrier of these medications is lack of proven efficacy, and navigating the appropriate clinical trials before providing these types of medications to patients.”

Rowan adds: “It’s hard to say that these therapies are really incredibly effective or have a place in the treatment paradigm for COVID-19 just yet. It’s likely an option for patients to use, but overall, there is not great evidence that current, available options have a real benefit. Fortunately, these over-the-counter medications are likely low risk.”

Coronavirus lingers in rooms and toilets but disinfectants kill it

https://aricjournal.biomedcentral.com/articles/10.1186/s13756-019-0569-4
Evaluation of the virucidal efficacy of disinfectant wipes with a test method simulating practical conditions

https://www.researchgate.net/publication/7706239_The_occurrence_of_influenza_A_virus_on_household_and_day_care_center_fomites
The occurrence of H1N1 and seasonal influenza A virus on household and day care center fomites

I put hand washing stations at both of my entrances that are foot-operated, one at the drive-in gate and one at the walk-in gate.     I used a gate spring found at home depot a few dollars and water shut off valve and some wire and tubing.   Come take a look at them.   Very simple.   a few hours each to set up.


A suggestion, make sure you have a bottle of soap and water mixed in your car, I use a  2 liter soda bottle.    And another for rinsing of just water.    And a towel in the car.  When you get out of your car rinse your hands and door handle and when you get back to your car do the same including the door handle before entering the car.   I keep a change of clothing in the car too, and have had to use it one time.   Keep a mask in the car, just in case you breakdown.

I have bleach spray bottles, use the cdc recomendation which is about 2% or  4tsp per quart.   I use the handsprayer for  the bleach for countertop surfaces and other areas like fridge door handles.  and i only use soap and water on my hands.  4tsp per quart. I have repurposed other spray bottles for this.

Prepare a bleach solution by mixing:
5 tablespoons (1/3rd cup) bleach per gallon of water or
4 teaspoons bleach per quart of water

I think these would be worth getting ordered one from china 2 month delivery time.    I have my homemade DIY handwash stations. 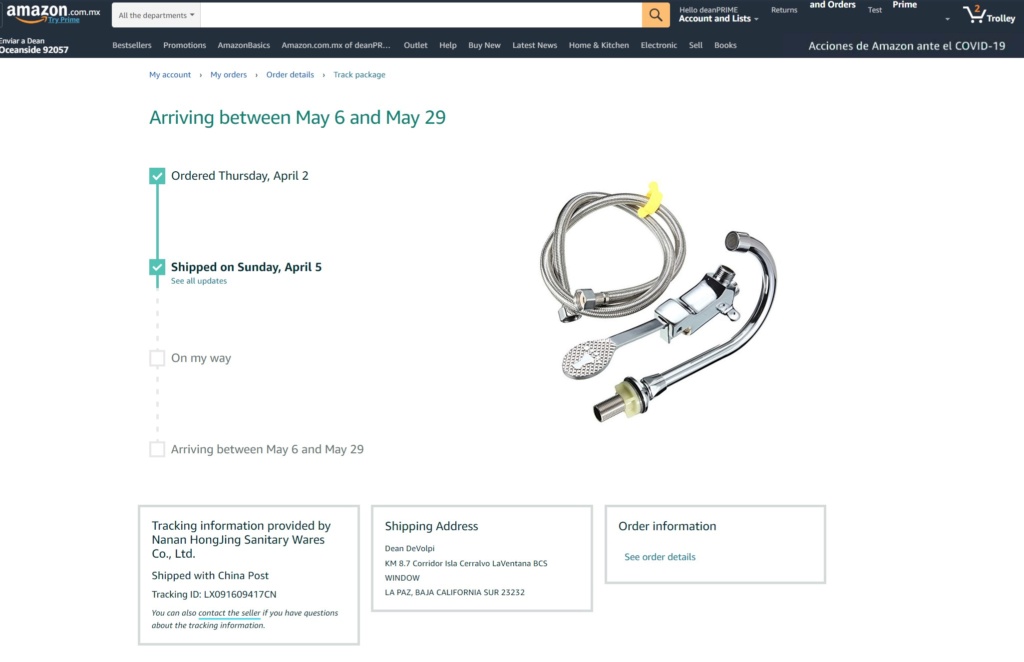 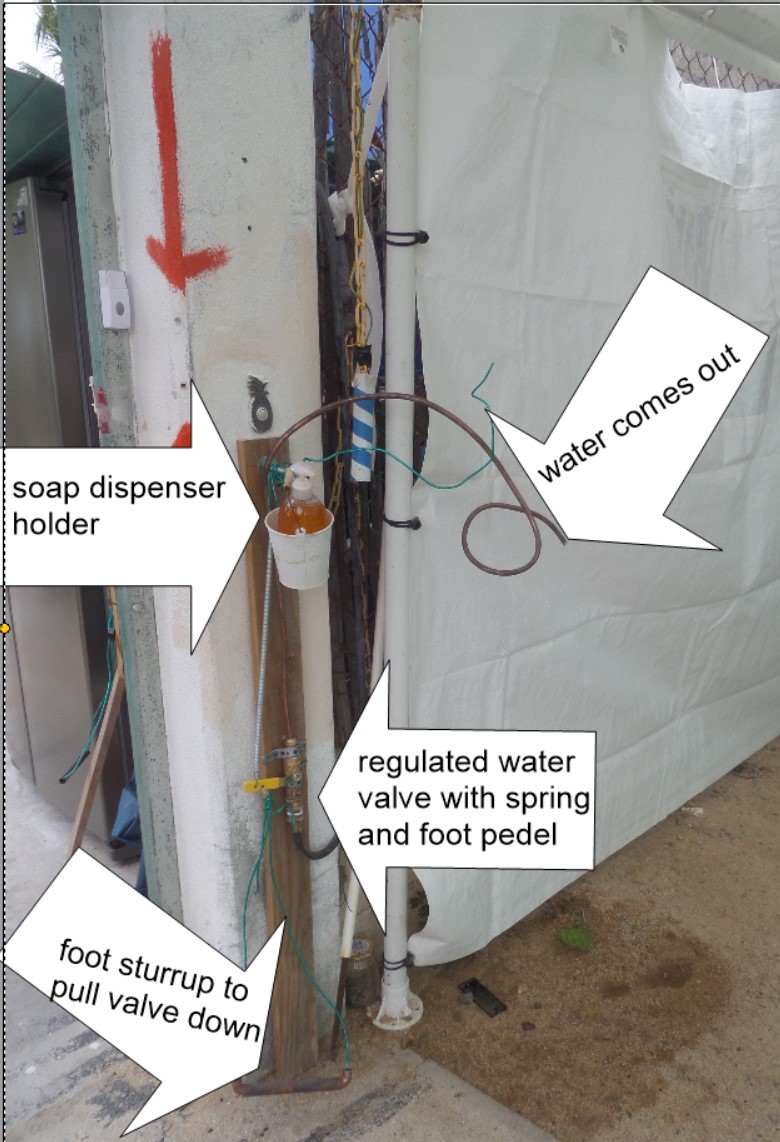